A Collaborative Christmas Market at GCHQ 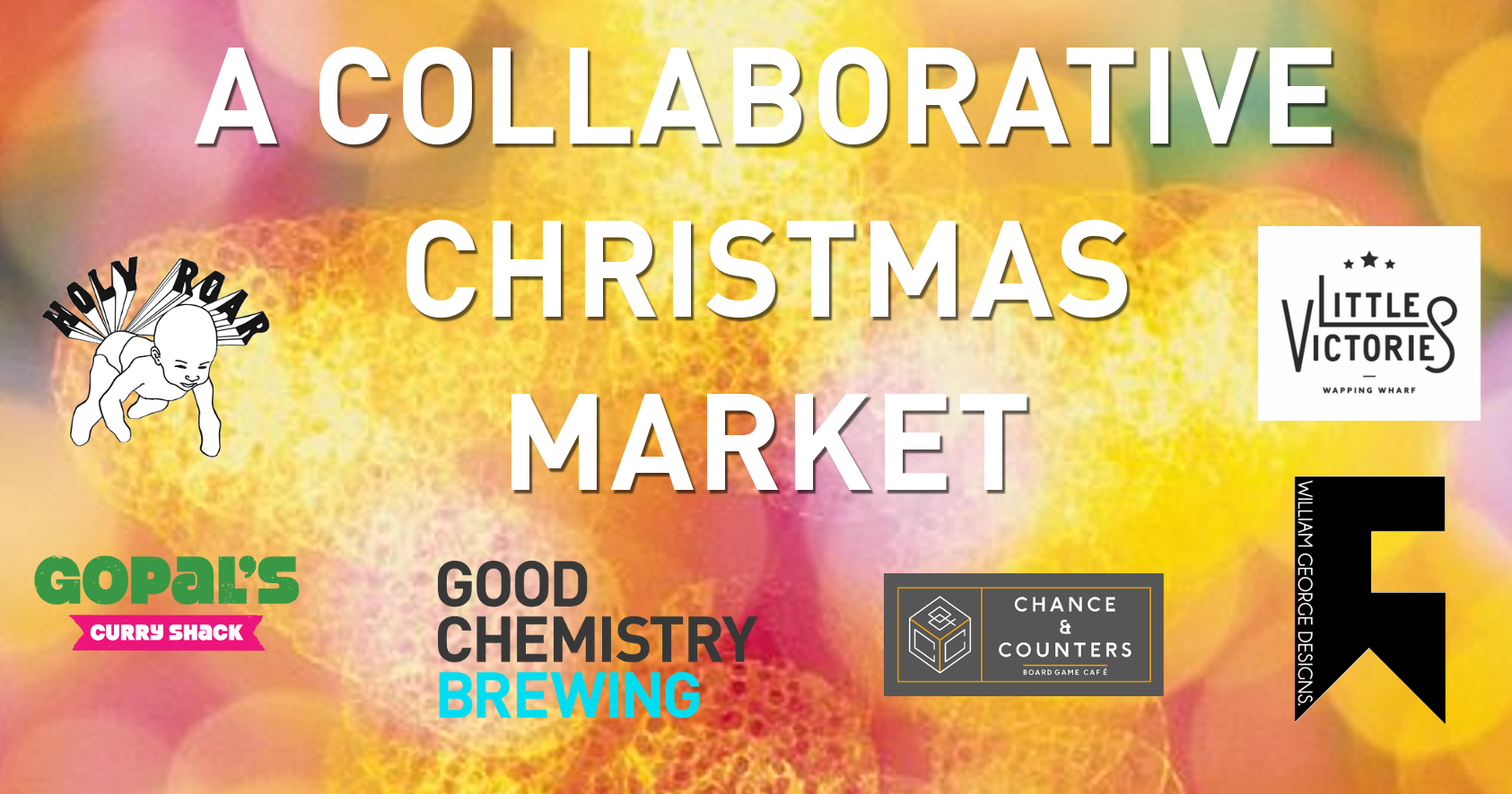 In December last year we ran our Christmas Brewers Market with breweries from across Bristol setting up stalls to sell you giftboxes, cases of beer and merchandise for the festive season. This year we wanted to change things a little, so may we introduce ‘A Collaborative Christmas Market’!

On Saturday 9th December, between noon and 5pm, we’re delighted to be joined by some of the amazing businesses we’ve worked with throughout 2017, and wanted to give you a bit of run-down of who everyone is, how and why we’ve worked with them, and what they’ll be bringing to GCHQ to get your Christmas going. We can’t wait to welcome you all to the brewery again for one last time in 2017 – cheers!

Gopal’s Curry Shack have had a presence at most of our events since the very first East Bristol Brewery Trail, back in April 2016. Since then, Mel & Heather have expanded from a pop-up to opening at Cargo2 on Wapping Wharf, but they’ve still found time to come hang out with us or supply the good stuff at our birthday, faux-Glastonbury, Pint of Science and our most recent Brewery Trail – as well as keeping us cosy at last year’s Christmas Market AND continuing their hugely successful pop-ups around the city! We love that their food is all vege (and some vegan) but still tastes incredible and is always beautifully presented.

We love their famous onion bhaji scotch eggs. And we love Mel & Heather’s community-minded collaborative approach to business, running the Bristol Eats collective that brings so much great street food to our city throughout the year.

Gopal’s Curry Shack will be bringing their delectable hot food to our market, as well as delicious hand-made pickles and chutneys, some that have our beer on the ingredients list – cheers! 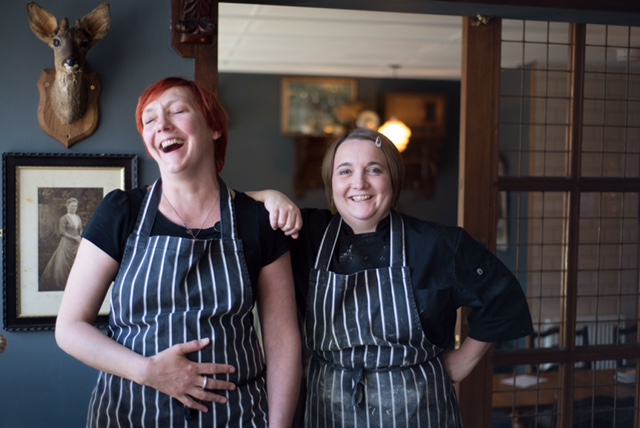 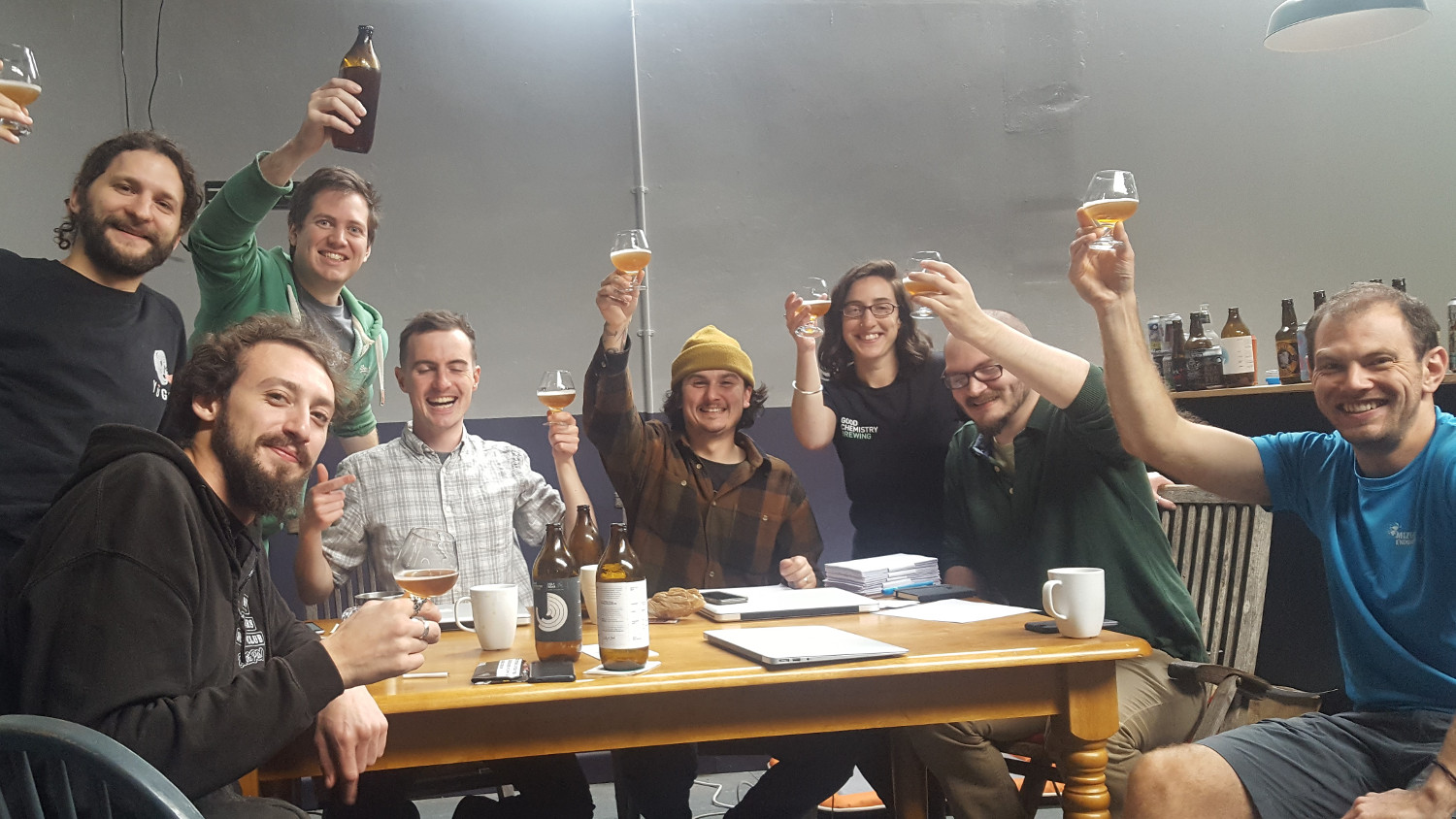 Chance & Counters have been running their board game café (the first in Bristol) at the bottom of Christmas Steps for just slightly less time than Bob and I have had Good Chemistry, and we’ve loved building our business alongside them. Their innovative, fun approach has resulted in the café being packed out through the year, with a huge range of people enjoying themselves, and they’re already looking at a second site beyond Bristol! Our beer is a permanent feature at Chance & Counters, and we love that their customers are so open to our more adventurous beers. We’ve talked about running events together using their game smarts and our brewery tap and space for ages, and that finally culminated in ‘Prohibition’ at the end of October. This game of social interaction and deduction, fully devised by Head of Games Dicky, turned the brewery into a 1920s speakeasy and brought people from across Bristol in fantastic costumes (and some dodgy accents!) to get the better of the Don. This will be the first of many such immersive events we partner up together to run. The best stuff comes from people who are really passionate about what they do, and that’s what we love about these guys. Chance & Counters works because they all really want to be there – indeed you’ll often find the founders and staff of the café there even when they’re not working, sitting around a table playing a game together, and if that’s not loving what you do we don’t know what is!

Chance & Counters will be bringing a range of board games to sell as well as their own merch, and if we’re lucky they’ll even bring a few quick games that you can enjoy while you’re with us.

Holy Roar Records are the behemoths amongst us at this event! Alex started his record label over ten years ago in his bedroom in London, with Rolo Tomassi his initial signing. I first saw that same band at the Croft in about 2007 and have followed them ever since, culminating in singer Eva giving my previous enterprise, The Festival Elderflower Company, a shout out on stage at ArcTanGent festival in 2016! When our paths crossed at last year’s Bristol Craft Beer Festival, and our mutual love for each other’s businesses became apparent, brewing a beer together seemed a natural thing to do. To launch Holy Roar the beer we put on a show at the Crofters Rights with three Holy Roar bands, including Sam’s current HRR faves Helpless, which was well-attended, even getting Big Jeff along! We’ve loved working with these guys (Justine now HRR’s second-in-command) – they’re enthusiastic, positive and know how to put on a good event. Their DIY ethic and small team doesn’t mean their product is anything less than totally professional, and they know what they’re doing because they’ve both been in bands (indeed Justine’s Employed To Serve are currently touring the UK with their second record). Watch this space for our next project together 😉

Holy Roar Records will be bringing Holy Roar releases on vinyl, CD and even a cassette or two, along with a variety of shirts, jumpers, hoodies and other pieces of merchandise – plus we’ve kept back the last few cases of Holy Roar the beer specially! 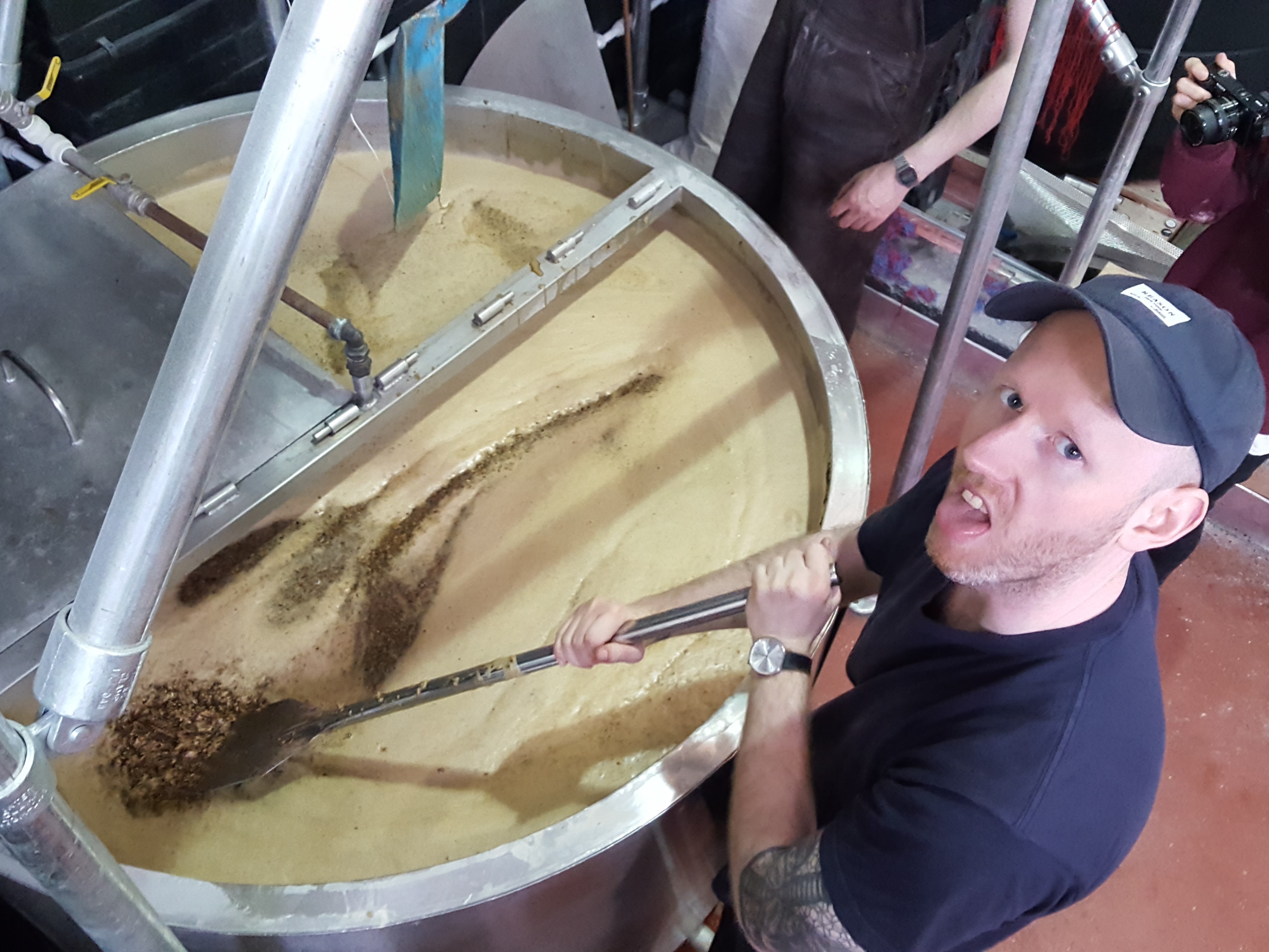 Will George Designs has been making beautiful furniture and other bits and pieces since 2016. His first commission was designing and building a brew bar for Uniqlo on Oxford Street, so we’re really excited to have been able to secure him to make the bar for our brewery tap. When he came in to talk to us about it, he immediately understood what we were after. Will hand-crafted the bar, following our brief to take inspiration from the traditional British pub, and we’re so delighted by it every time it’s set up. It’s got a lot of appreciative comments too, and we thought you’d like to meet the man who made it. He’s recently moved into studio space nearby too, so can now dedicate even more time to making lovely things.

We love Will because he’s incredibly humble but got serious skillz. He’s in high demand and making handsome furniture, but his small pieces are just as full of love and talent too. He’s easy to work with, recognised what we wanted and engaged with our ideas. His enthusiasm made the project a really positive experience for us, and we’re looking forward to working with him again. He also makes a mean cup of coffee, having previously been behind the counter at FCP!

Will George Designs will be bringing a small range of handmade homewares and accessories perfect for gifts. He’d probably love to hear how beautiful you think our bar is too! 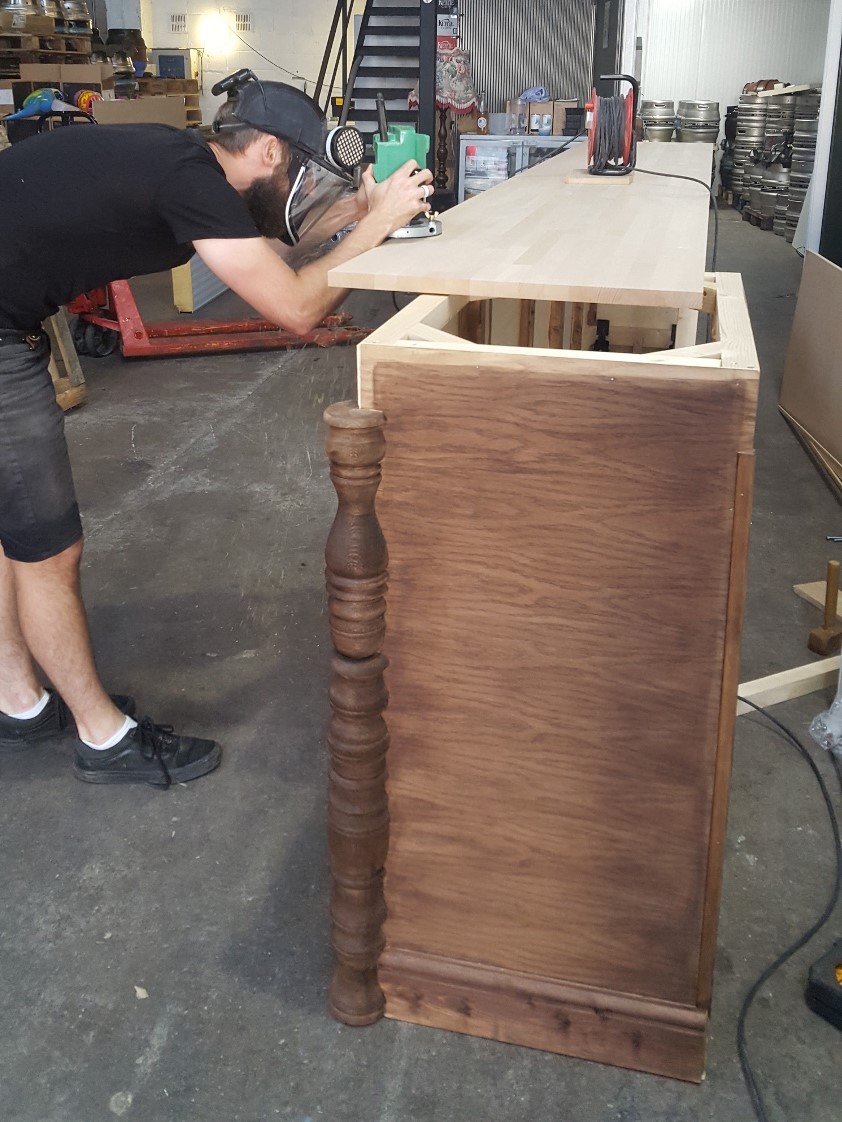 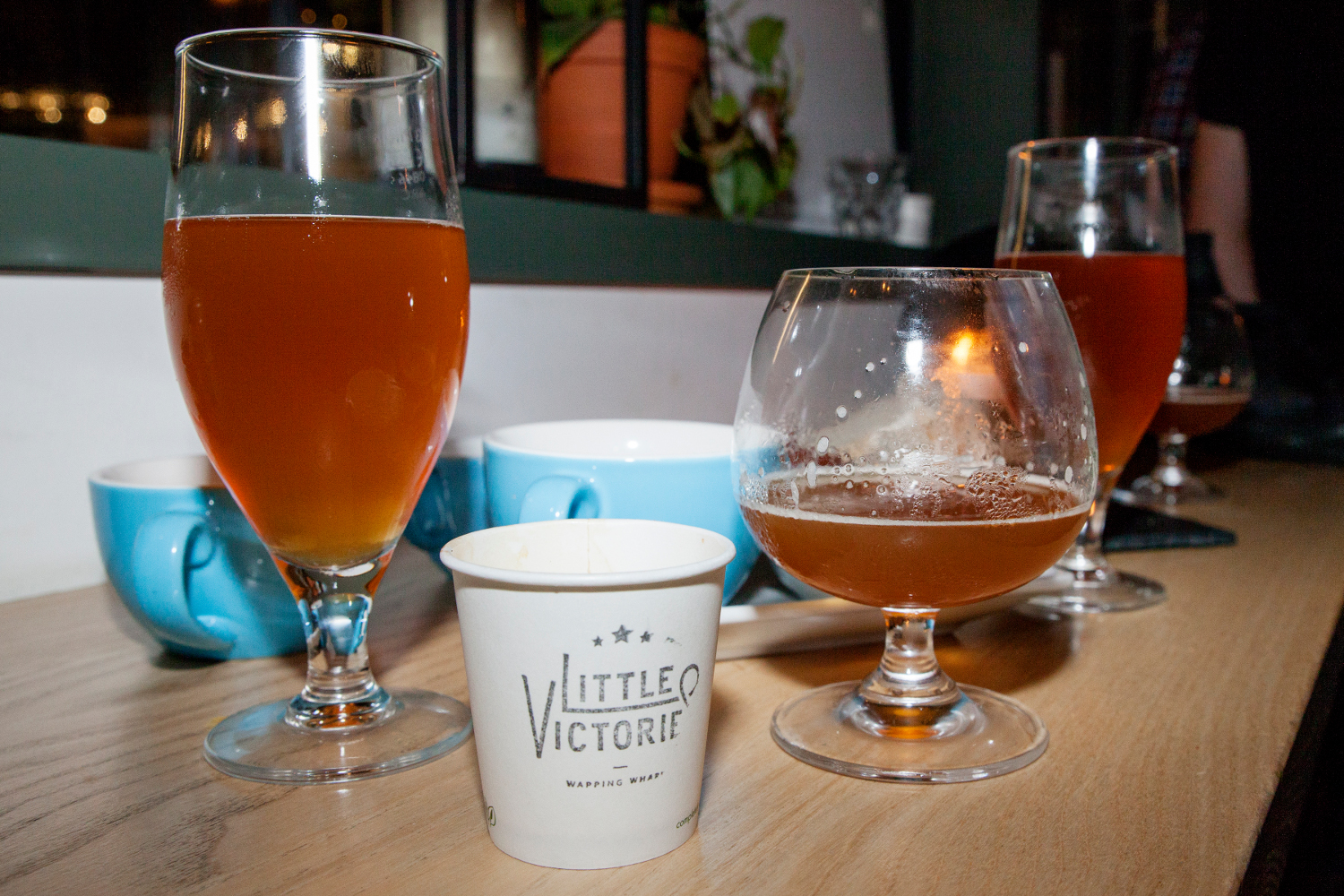 Little Victories opened in August last year but John & Chris were already part of the fabric of Bristol’s coffee scene with Small Street Espresso, their first venture, well established in the old town. Their beautiful space in Wapping Wharf is light, bright and airy during the day but, as our brilliant coffee and beer event for Bristol Beer Week demonstrated, cosy, warm and inviting in the evening too. Making our collaboration beer and running the joint event together in October showed us just how technical coffee can be – much like beer and brewing. We very much look forward to working with these guys in 2018 to create an even more interesting coffee beer combination.

We love their scientific approach to coffee, but the warm welcome they give to the novice too (or even someone who doesn’t drink coffee like me – we also love their Cold Brew Negronis!). We love the convivial café-bar they’ve created, with its enormous menu board and high benches. And we really love their signature blue crockery!

Little Victories will be bringing their mobile coffee machine to GCHQ to warm up the non-beer drinkers. They’ll have a range of great coffee accoutrements perfect for gifts. And they’ll be busting out the Espresso Martinis!

We’re also really pleased to be joined by John Thackray, the editor and designer of Hopped. The first issue of this brand new magazine celebrating the people, ingredients and communities involved in the brewing industry has just been published and is on sale across the country at selected bottle shops, bars and taprooms. As well as a feature on the most recent East Bristol Brewery Trail back in August, I’m writing a regular column in the magazine called Inside The Mash Tun  – the inside story on life in a brewery! This first ‘Nano Brew’ issue will be available to buy, and John looks forward to meeting you on the 9th. 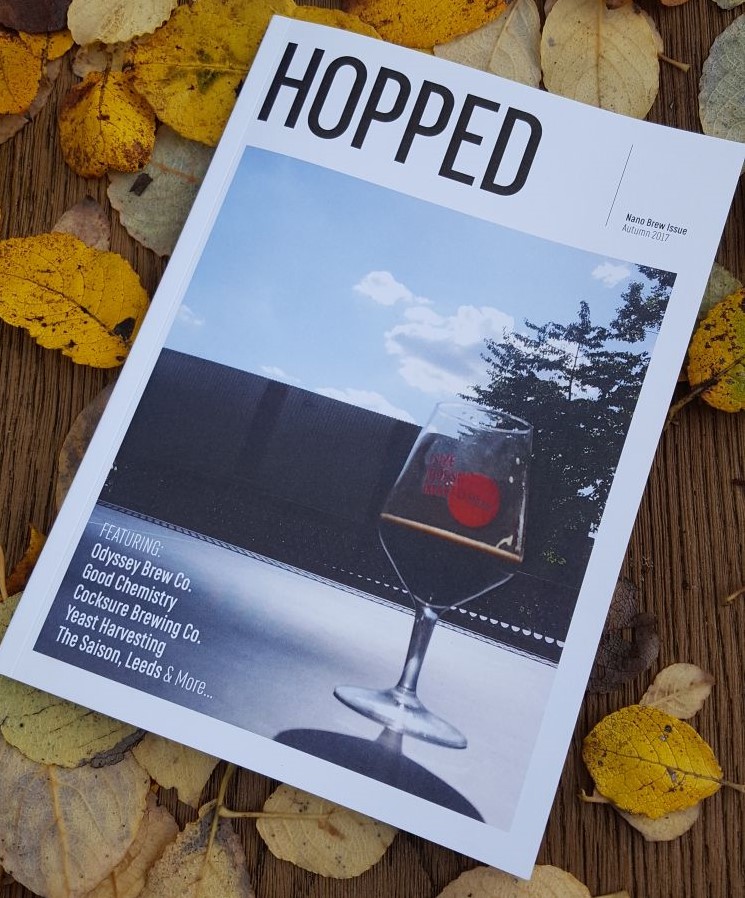 Some of the beers we’ll be serving on the bar, and have available in bottle, at our market include Bonne Chance (made with Chance & Counters), Holy Roar (made with Holy Roar Records), Naturally Victorious (made with Little Victories), and Wits End (made with Nic & Cece from Small Bar).

See you on Saturday 9th!